The Pavlova Wind Quintet was formed in 1999 by Simon Payne along with fellow-founder members Carolyn King and Chris Britton. The aim of the group, based in Oxford and Abingdon, England, has been from the outset to explore the more unusual and exciting areas of the wind quintet repertoire, and over the years it has become one of the most enterprising and high-profile ensembles in Oxfordshire. Its name was taken from the road where Simon lives in Abingdon (Anna Pavlova Close), the initial main venue for our rehearsals. It was the former site of the Pavlova Leather Works, whose owner was a big fan of the famous early 20th century ballet dancer. The group’s impressively broad repertoire includes music in a huge variety of styles, from arrangements of light-hearted favourite tunes to the more substantial and demanding classics for wind quintet. We take a delight in mixing the familiar and unfamiliar, classical and ethnic, serene and virtuosic. Our concert tours have taken us to France and Germany on twin-town visits (Grenoble, Bonn, Argentan and Colmar) and have resulted in concerts in unusual venues, for example an immigration detention centre near Oxford, a castle in Devon, and a German department store! Many of our concerts are built around themes, with a South American one including first UK performances of dance suites by the Brazilian composer and conductor Julio Medaglia. Typically unusual, our first CD is based entirely on arrangements of piano and orchestral pieces, recorded for the first time.

Claire Hollis (Flute) joined Pavlova Winds in 2021. Claire is an Oxford Chemistry graduate turned Management Accountant. Music was very much part of Claire’s life through school, university and beyond, including playing with Notts County Concert Band, Oxford University Orchestra, Catz Orchestra and Nottingham Philharmonic. A move to Horsham in 1992 sadly resulted in a dirth of musical opportunities, the flute chairs already being occupied in local orchestras, and the motivation to practise declined. However, being asked to play at her brother’s wedding in 2002 forced her back into practising and a move to Nairobi, Kenya a few months later, had the unexpected consequence of the music world opening up again. For the next 16 years, Claire was Principal Flute (and Treasurer) of Nairobi Orchestra, and also had the privilege of playing a number of concertos with them. She also played in various smaller ensembles and founded Equatorial Winds, a very international wind quintet with Nairobi-based players originating from four continents. Memorable playing opportunities have been a condensed version of Porgy and Bess with Cape Town Opera in Hells Gate National Park; a solo during evensong at St Paul’s Cathedral, London; and playing at Governor’s Camp in the Masai Mara three years running with various ensembles including Equatorial Winds, and on one occasion having to cross the crocodile-infested Mara River by boat after dark in concert attire, and clutching instruments!! Whilst based in Nairobi, her work overseeing the finances for SIL International’s work of Bible translation and literacy across sub-Saharan Africa led to much travel, both across Africa and to the U.S., but playing a diminutive instrument meant that wherever Claire went, her flute got to go too! She returned to the UK to take up her current role as Director of Finance and Operations with Wycliffe Bible Translators in 2019, and moved to South Oxfordshire in 2020. She’s been delighted to have had a number of musical opportunities so far, having played with Oxford Sinfonia and Oxford Symphony Orchestra as well as Pavlova Winds, and is looking forward to many more and to getting more established in the music scene here.

Christopher Britton was born in London, but has lived in Oxford since 1983, where he is well-known as a professional flute and recorder player with a busy teaching practice on both instruments. He received his earliest intensive musical training as a Junior Exhibitioner at the Royal College of Music, going on to study music and German at Birmingham University. He has been a student in private lessons and masterclasses of such distinguished flautists as James Galway, Susan Milan, Peter-Lukas Graf, Atarah Ben-Tovim, Graham Mayger, Delia Ruhm and Peter Lloyd. He has freelanced with BBC orchestras, occasionally appearing as a concerto soloist and broadcasting frequently on BBC Radio 3, playing under such eminent conductors as Norman Del Mar, Richard Hickox, Rudolf Schwarz and George Hurst. More recently he has been playing with local professional orchestras, occasionally as a soloist, as well as in diverse forms of chamber music: with the Pavlova Wind Quintet (since its founding in 1999), and in a duo with the guitarist Raymond Burley. Recent concerts have featured him in events as extraordinary as appearing with the Oxford Trobadors in performances of Occitan songs and improvising with ex-Swingles Singer Wendy Nieper! He also enjoys playing Latin-American songs and other folk music with his trio Serendipity (flute, guitar and percussion)! In 2006 he recorded a CD of music by J.S. Bach for solo flute for Magnatune  (Counterpoint for One). He is a keen pianist, which has inspired him to arrange piano music for the Pavlova Quintet mainly, with much of his work in evidence on their recent disc Pavlova Presents….. He is also interested in ethnic flute-playing styles and has performed on the Irish flute and the Peruvian quena.

Carolyn King’s last concert as a full time member of the quintet will be 16 December 2018 at St Nicolas church, Abingdon (3pm).

Carolyn studied the oboe with Natalie James and Anthony Camden. She read biochemistry at Lady Margaret Hall, Oxford, and at University College, London. She completed several years of post-doctoral research in Oxford before relinquishing her scientific career to concentrate on music. She has subsequently built up a busy free-lance career both as an orchestral and solo player, and has toured extensively in Europe with the City of Oxford Orchestra where she was the principal oboe for many years. She has long been in great demand as a teacher in the region, but has now given up her teaching practice to focus on playing. She is the founder of the New Oxford Ensemble and a founder-member of the Pavlova Wind Quintet. She is very interested in how dyslexia affects music sight-reading and has recently completed an MA at Reading University on this subject.

Wendy Marks joins us as full time oboist in January 2019.

After studying oboe at the Birmingham Junior School of Music whilst at school, Wendy then moved to the Guildhall School of Music in London where she studied oboe, piano and double bass.

Her love of chamber music was ignited in London whilst playing in the Guildhall Wind Octet and being coached by Anthony Camden. After leaving college she became the oboist in the Albany Wind Quintet in Salisbury for many years before moving to Oxfordshire and being a founder member of Wendlebury Winds. She has played with the Pavlova Quintet from time to time but was very pleased to be invited to join full time from 2019.

She has performed many concertos including a world première of Brookes’ Oboe d’Amore Concerto, plays the oboe regularly with many local orchestras including The Oxford Sinfonia and the Cotswold Chamber Orchestra, and enjoys the contrast of playing Double Bass from time to time too.

Her love of music is not limited to classical music and she was a member of the progressive folk rock group Mermaid Kiss for several years performing on flute and recorders as well as the oboe and Cor Anglais (and backing vocals!) She can be heard on their Etarlis and Another Country albums.  Wendy has even found herself performing in a Carpenter’s tribute band.

She is currently in demand as a woodwind teacher and conducts several local amateur groups: four wind groups and an orchestra.

Barbara Stuart studied the clarinet at the Royal Academy of Music with John Davies and Georgina Dobrée where she specialized in the E flat clarinet, studying with Richard Addison (Principal, Royal Philharmonic Orchestra). In her final year at the RAM (and on her twenty-second birthday) she won the MidNorthumbrian Arts Goup National Clarinet competition with the amazing prize of any clarinet she chose, and the opportunity to perform a concerto with the Northern Sinfonia at Alnwick Castle.   Barbara’s day job is working for Oxford University Press marketing printed music. Barbara plays clarinet regularly with local orchestras including the Oxford Sinfonia, the Oxford Chamber Orchestra, and Woodstock Music Society and plays the E flat clarinet and bass clarinet in several others. She was first invited to join the Pavlova Wind Quintet for their Christmas concert in 2001.

Jenny Morgan studied the horn under the tuition of Alfred Dowling in Liverpool and Anthony Halstead in London. She was a member of the National Youth Orchestra of Great Britain from 1989 – 1993, and has regularly played with numerous orchestras in the North West, including the Liverpool Mozart Orchestra. Jenny read Music at Jesus College, Oxford, where she undertook a wealth of orchestral and chamber playing, notably performing the Britten Serenade for Tenor, Horn and Strings and the Schubert Octet with the Allegri Quartet. She was also Musical Director of OUDS where she wrote the scores for over a dozen university productions. On graduating, Jenny pursued a career in financial services in London. She became a member of the Pavlova Quintet in 2005, and now combines playing and teaching with looking after her two young children.

Simon Payne was brought up in Colchester and started playing clarinet, changing to bassoon at 14. He played in many local orchestras, in the Essex Youth Orchestra for six years, and the British Youth Symphony Orchestra for two years. While reading Classics at New College, Oxford he played the bassoon in the University and Oxford Symphony Orchestras, and in two wind quintets, and began teaching bassoon in Oxford schools. After working for some time in London as a publisher and playing bassoon for Morley College wind group and for Abbey Opera he returned to Oxford and played regularly in a wind sextet performing 18th century wind music in costume in country houses. He plays with the Oxford Symphony Orchestra, Oxford Sinfonia, Cotswold Chamber Orchestra, Kidlington and Woodstock Operatic Societies, Bampton Opera, Henley Symphony Orchestra and various wind ensembles. Founder member in 1999 of the Pavlova Wind quintet, as chairman of The Oxford Sinfonia he helped to increase its profile and attract top-quality conductors and soloists. He was Development Manager for the  Oxford Philomusica from 2009 to 2013, and is currently General Administrator of the Orchestra of St John’s, director John Lubbock http://www.osj.org.uk.

The group’s impressively broad repertoire includes music in a huge variety of styles from arrangements of light-hearted favourite tunes to the more substantial classics for wind quintet. The Pavlova Wind Quintet delights in mixing the familiar and the unfamiliar, classical and ethnic, serene and virtuosic.

To hire the quintet for a concert or event, contact us on simon.payne@virgin.net or 07775 904626.
Download our leaflet in PDF format.

We also played for Vue Cinemas in Oxford to advertise a screening of Swan Lake. Here is the quintet with a troupe of young dancers. 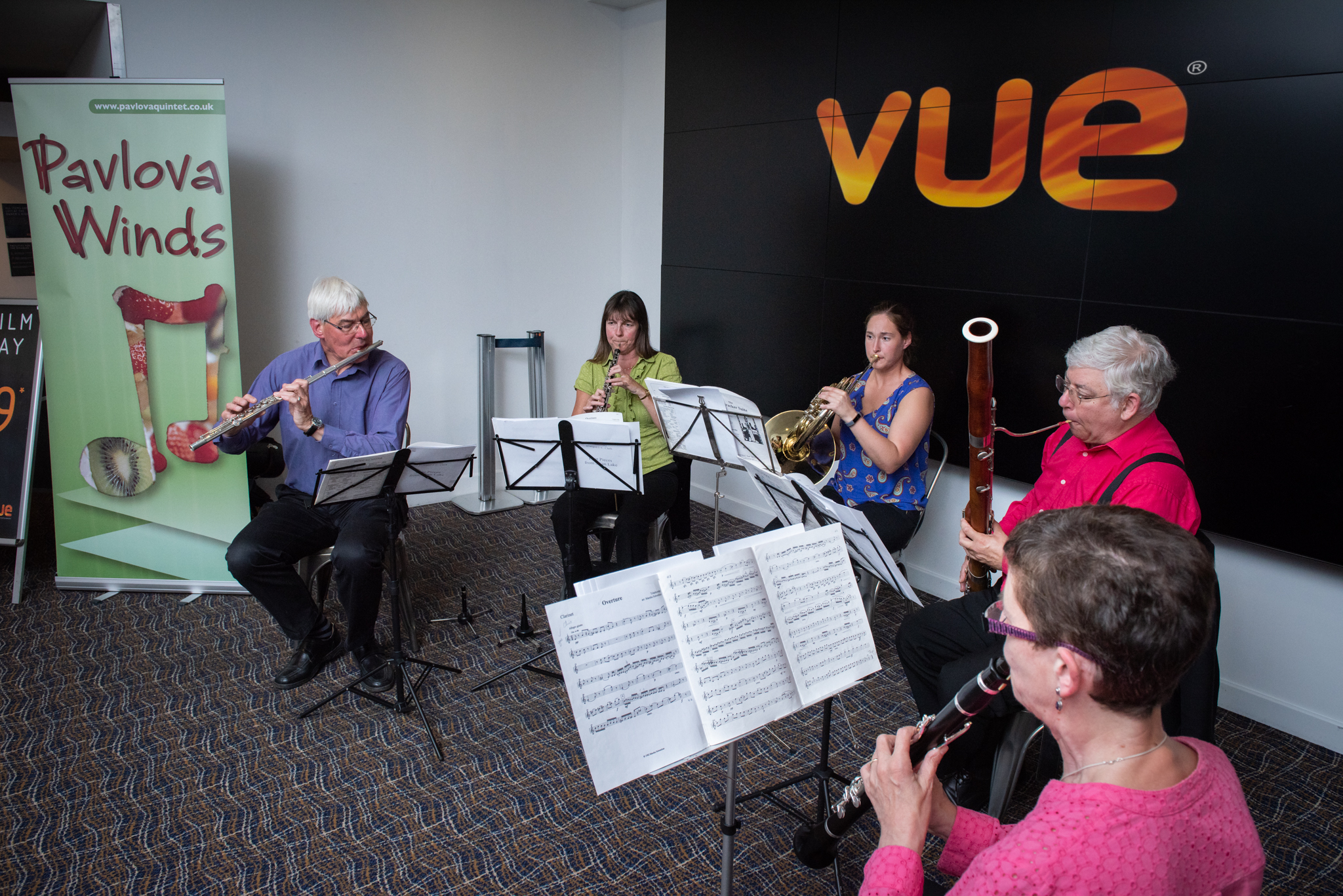 We visited Colmar in June 2018. Here is our new concert dress and a poster. Plus a view of one of the churches where we played. 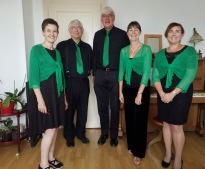 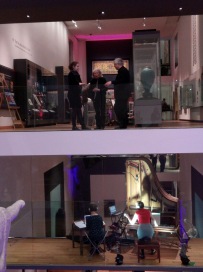 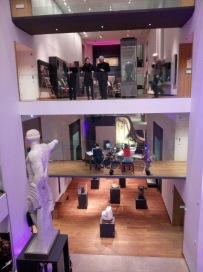